We are a multi-skilled team of third year BA film students. Three of us - Chezz, Shahad and Jamie -worked together last year to create the dark comedy Life Gnomemore. Patrycja has previous DoP experience from the short film The Internal Bias. Maksim has sound recording (as well as sound design experience) from a variety of short films. He is also directing his own experimental film.

As a team, we are passionate about ensuring that the story is told properly. Our previous experiences in the industry and our BA Film course culminate in Undertow. This is the most significant film that we have created from the ground up.

In addition, we have Evangeline Parry on Script Supervision!

What is Undertow about?

Undertow is a short drama, following the struggles of our fifteen-year-old protagonist, Elise - as she attempts to deal with the grief caused by the loss of her father, whilst being relentlessly bullied at school.

Finally finding a friend in new classmate, Maya, things start to look up - until circumstances change and lead Elise into a deeper depression and her eventual demise.

Why is it important?

Undertow is an important story to tell, and one so often overlooked in favour of the happy endings. Written by Chezz, it is a hard-hitting but necessary drama that follows Elise’s struggles with grief, bullying, new friendships and young love.

Undertow has a great deal of relevance in the modern age, when it comes to both bullying (in person and cyber bullying) as well as the prevalence of mental health issues.

By supporting us in making Undertow, you will help this film make the impact it needs to on audiences, if just to start the conversation about depression, suicide and bullying.

We believe that Undertow is an important story to tell. Elise’s experiences are similar to those of thousands of teenagers and young adults suffering from depression and anxiety. It’s too easy for depression to go unnoticed and we hope that this film can bring further attention to these issues through it’s characters and the narrative.

As important as this story is to tell, we can’t do it without your help.

Our plan of action

The minimum budget for us to make Undertow properly is £1,900. This will allow us to pay actors, secure our school location and cover basic catering. It would mean though that we won't be able to reimburse cast and crew for items such as travel or hire additional costumes and props, among other things.

While we believe this is all doable, our ultimate goal is to raise £3000 as this would allow us to secure the perfect secondary location, rather than going for an “okay-looking” location, and create a more complete filmic world (art direction, costumes and extras!), which will help ensure the quality of the final product.

Regardless, our plan is to make this film, no matter what - even if we have to take over our University campus and make it look like a school! 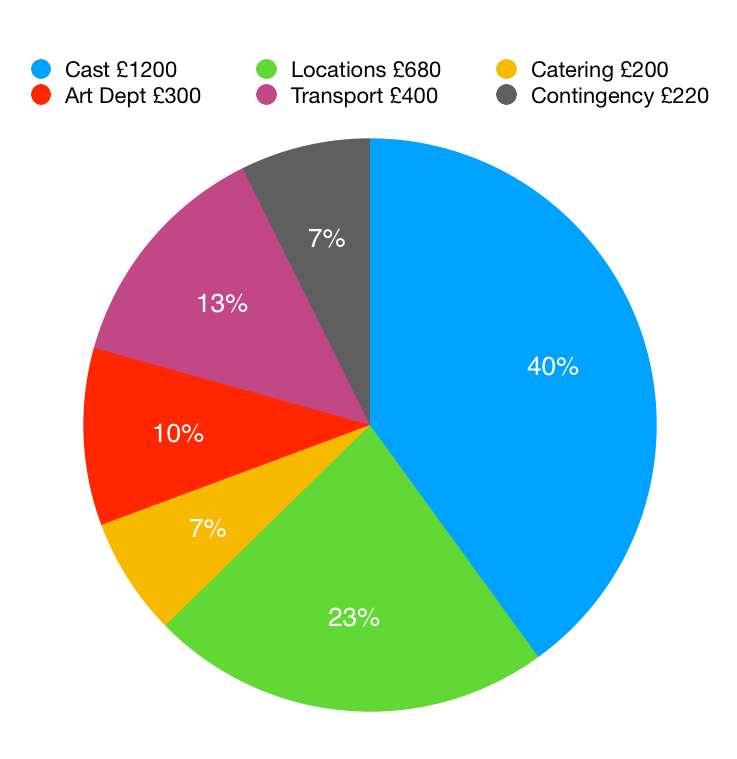 The majority of our budget (around £1200) is to go on hiring our actors. We are currently in the process of casting and updates will be provided as and when we hire our actors.

Our second largest expense overall will be our locations (around £680). We’ve been on RECCE’s for primary and secondary locations and updating on these through our Alpha Films social media pages (e.g. our visit to Tottenham Marshes). You can find out how to follow us on social media by reading on!

For our cheaper option, we would be looking at approximately £480 for a school for two days and beach for two days, while our more expensive option would be the same school, but a better beach location (price depending on availability and permits). We will also need to pay for a suitable house location. In total, we have budgeted and additional £200 for this.

We will need to provide catering for our cast and crew for the entirety of the shoot, so have allowed £200 to cover this.

Another expense for production will be costumes and props. While we aim to acquire as much as we can from our university costume department, realistically we won’t find everything here. For this reason, we aim to have a minimum £200 budget for the Art Dept but our ideal budget would be £300.

We will need to plan travel around where we are able to film, and pay for the travel of actors and extras, as well as potentially the movement of equipment if it is difficult to bring to location using public transport. For travel we have currently budgeted around £400. Also we ideally hope to have some contingency funds in case something unexpected happens (if we don't use this, we can out it towards the cost of a composer - see below - and festival submissions for the completed film).

If we were to overfund, we would like to be able to pay a composer for the project. We have someone in mind currently who is willing to help us out, however we’d like to keep on good terms and be as professional as we can (and being able to pay them something would help greatly in this!).

Overfunding would also allow us to put more towards festival submission fees. Currently we would like to submit the finished film to Aesthetica Short Film Festival and Underwire, although it has the potential to be submitted to a wide variety of festivals around the world.

"As the writer and director of Undertow, this film is very close to me - both the script and the subject matter - I want to bring the reality of depression and bullying to the forefront in this film, to somewhere people cannot just ignore it in favour of believing in happily-ever-afters. I hugely enjoy both directing and screenwriting, and being able to create something from absolutely nothing for the first time - and take it through every stage of creation - is something I've enjoyed so far and I'm excited about continuing. We've got a great team and new names being added as we go - so I hope you'll help us on our journey to create Undertow." - Chezz

"I hope to sharpen my cinematography skills and gain a better understanding of how emotion can be represented through camerawork. This film is the biggest production I have ever worked on, and doubles as a major final-year project on our university course, which means more effort than ever will go into ensuring that it remains as professional and well-made as possible, which will undoubtedly help me moving forward with a career in the film industry. The continued experience of working in a production team as a group will help support my development as a filmmaker.” - Jamie

"This film is a new adventure and a new challenge as it’s the biggest project we have ever worked on. I know that all of us will make mistakes but will learn from these. I am looking forward to being able to apply my own chosen style in order to support the nature of the film and hopefully make the story even more powerful." - Patrycja

“Producing this film very important to me, as it talks about the experience and effect of bullying. I think as a producer, it is a very sensitive and important topic and the world needs to realise that it still goes on and a lot of people are affected. It is going to be a very interesting challenge but I’ve worked with Chezz as my director before on a couple of projects, and we have mutual interests in making this film.” - Shahad

Keep up-to-date with our progress

During production we intend to provide weekly updates, most of these through our Facebook page - https:\\www.Facebook.com/AlphaFilmsCo/. You can also find us on Twitter - https://mobile.twitter.com/Alpha__Films.

We have a variety of rewards available for companies and individuals alike, everything from product placement and advertising and executive producer credits, to physical Alpha Films merchandise (such as tote bags and stickers). Check out our rewards section for more info!

An example of the Tote Bag Perk is shown below (image printed on bag is subject to change). 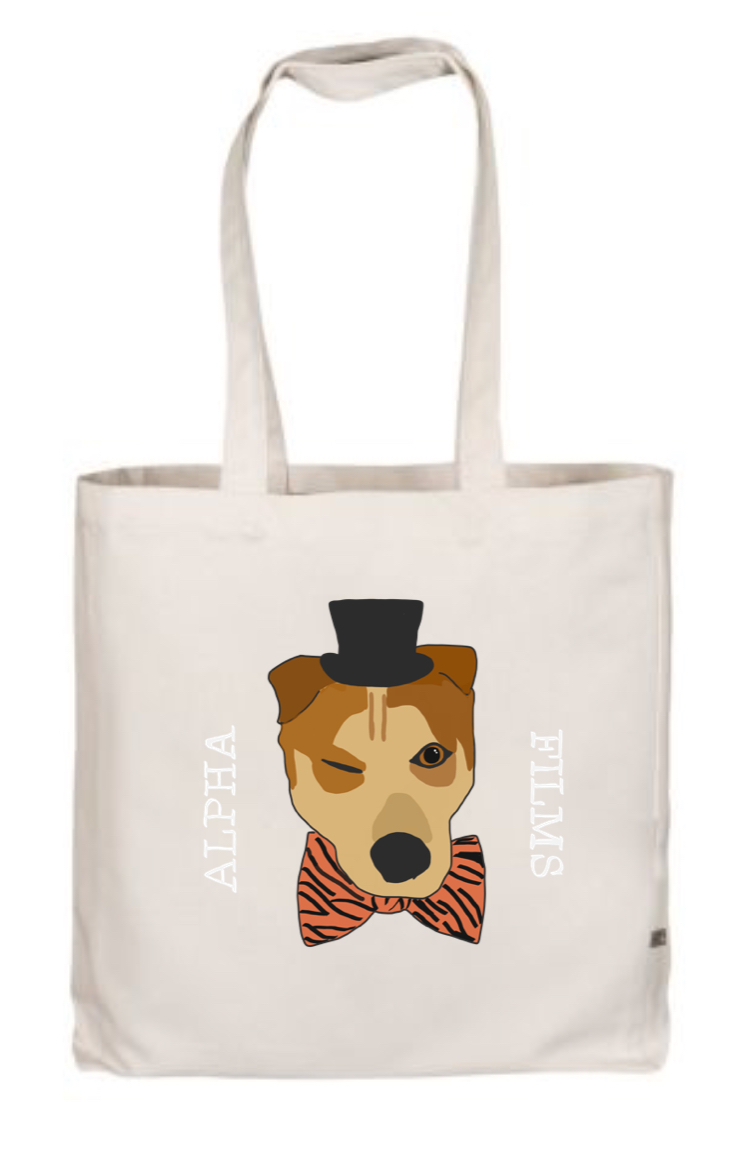 We can also accept donations through PayPal or in cash (if you know us). If the latter, we will then have this added to our crowdfunding total, without you having to input any details.

We completely understand if you can’t help us financially, however sharing the project with your own personal network still helps! It gets the word out to people who might be able to help (and we’d be very grateful).

We can’t make this film without your help.

Undertow
Your message has been sent.