A project by: Max Stern Hello, my name is Max Stern, founder of Canned Tunes, a non-profit event management organisation, dedicated to raising support for food banks and social causes in the areas where our events are held. I am also currently a 3rd year Music Business and Arts Management student at Middlesex University.

With my crowdfunding campaign I am hoping to raise an initial round of funding so we can ensure Canned Tunes becomes a sustainable concept. Funds raised will also be used to cover the costs of venue hire for ‘NOISE EATER’ - Brighton , a charity gig project in aid of Brighton Food Bank taking place on 8th March 2018 at Sticky Mike’s Frog Bar, Brighton . I will also be running a second 'NOISE EATER' event will be held in my hometown of Watford at The LP Cafe on 31st March 2018, supporting Watford Food Bank but I have managed to secure the venue for the second event for free.

What is Canned Tunes all about?

Canned Tunes was founded in 2016 with the simple concept of hosting emerging psych & shoegaze artists in trendy 'scene-focused' venues across London and Brighton. All of our events are in aid of various foodbanks / social causes in the local area, so as well as accepting money to gain entry to a gig, we accept a set amount of canned food and toiletry donations as entry too.

Our progress to date

A year after its inception, 'Canned Tunes' has grown into a truly independent non-profit promoter with ties to the best new psych sounds of the south east. We have also been exploring new partnerships with charities / ethical movements across the UK. We are now hoping to take our concept to the next level now by rolling out two new 'NOISE EATER' events in the UK, with the first of these taking place in Brighton and the second taking place on a slightly smaller scale in Watford.

'Canned Tunes Presents: NOISE EATER’ operates a simple concept of ‘food-for-entry’. For both events, we will be encouraging everyone to bring three cans (non-perishable food) / toiletry donations on the night (which will be donated straight to BFB/WFB) to gain entry to the event.  We will also be accepting £3 on the door for those who don’t bring food, in order to make this event accessible to everyone.

The Brighton Green Party have described the concept as a “brilliant example of some of the imaginative, artistic ways people and groups are supporting foodbanks across the city". Commenting on NOISE EATER, Sue Shanks, Chair of Brighton and Hove Green has said: “It’s fantastic to see a merger of Brighton & Hove's passion to help the most vulnerable in our city and our vibrant, inimitable music scene, to raise awareness and support on such an important issue.”

Circe - Circe is an alt-pop band who came together only a few short months ago in Brighton. The band is led by an icy, ethereal voice and a penchant for the mystical. Having just released their second single ‘Under My Skin’ Circe demonstrate why they have come to be characterised by their talent in combining dark dramatic lyrics, brooding soundscapes and visceral synthbass to create an otherworldly dimension - as if Kate Bush was exploring the depths of the upside down. Circa on Instagram .

Method Actress - “Method Actress‘s sound is instantly evocative and affecting – a wintry fusion of dreamy shoegaze and post-rock that will send a tingle scampering down the spine.” - Hidden Herd.  Check out their Instagram page too for further information.

Kassai - A noise pop/post-punk band from NW London with echoes of dream-pop and shoe gaze…for fans of reverb and noise.

Circus Cannon - A London based psychedelic four-piece who aim to reach sonic bliss through pounding drums and explosive guitars at great volumes. A loose band of multi-instrumentalists who switch instruments throughout their dynamic sets to achieve their varied sound. Find out more also on their Instagram page .

Kassai - A pop/post-punk band from NW London with echoes of dream-pop and shoegaze…forfans of reverb and noise.

Why Canned Tunes is so passionate about NOISE EATER ad supporting local food banks in Brighton and Hove, as well as Watford

Food poverty in Brighton and Hove is a huge issue at the moment. Earlier this year it was reported that the Whitehawk food bank has seen a 62% increase of referrals for emergency food supplies and a staggering 4,218 people are recorded as living in temporary accommodation or rough sleeping.

The statistics for Watford show a similar state of affairs. Housing and rent prices are on the increase due to gentrification and an ever expanding London commuter population, the area is quickly becoming unaffordable and leaving many families struggling to make ends-meat.

This is the unfortunate state of Britain today, and shows just how relevant and important organisations such as Brighton Food Bank are to the alleviation of modern poverty.

Since Canned Tunes is a charity gig concept, we are lucky enough to be able to secure many of the things that typically cost a lot (e.g. the artists and venues) at a reduced / in-kind rate. The purpose of our crowdfunding campaign is therefore threefold:

- To raise enough money to create dedicated Canned Tunes marketing materials , such as a website, posters, social media adverts, etc. This will help us get the word out there and make our brand more sustainable. Some of the marketing collateral will be specific to the Brighton and Watford NOISE EATER events in order to spread awareness and increasing attendance at these gigs.

- Raising funds for the food banks themselves . If we get more than our £345 stretch goal for the Brighton venue hire and Canned Tunes marketing activities, we will be able to provide additional funding (in addition to that raised through the NOISE EATER event itself) to chosen Brighton / Watford Food Banks. These additional funds would be donated in the form of practical food donations. 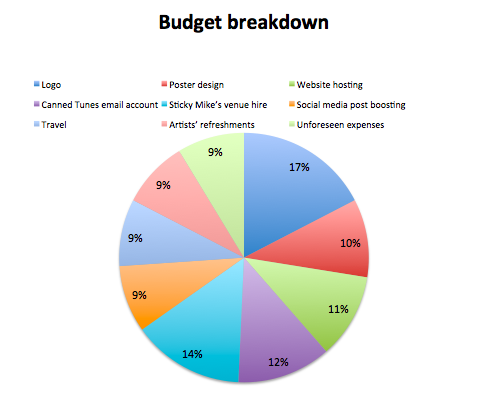 We have some great rewards on offer, so check out the right hand side of this page for more detail.

Help us spread the word

Even if you can’t donate to our campaign, you can still play a major part in our success by sharing our campaign link with as many people as possible!

We will provide updates throughout the campaign and some updates from the event itself through social media and on our crowdfunding page!

For taking the time to read our crowdfunding page and find out more about Canned Tunes and the NOISE EATER event series! We hope that together with you we can make the two NOISE EATER events currently scheduled a great success and ensure Canned Tunes can run more of the same in the future!

Canned Tunes Presents: NOISE EATER
Your message has been sent.

Thank you, your report has been sent.
Canned Tunes Presents: NOISE EATER