A project by: antonio fabiani

Hello! We are Antonio Fabiani and Mubaraq Durosimi, two final year BA Film students at Middlesex University and respectively Producer and Director of The Black Card , a 15-minute film. This film also happens to be our final year film project so counts towards our degree.

We are both keen thriller fanatics and very passionate about our film project as it will cover issues that are very important to us, such and racism and injustice. We are very ambitious and with your help we hope The Black Card will be a well executed and visually compelling film.

The Black Card - the plot

Written by our Director, Mubaraq Durosinmi, The Black Card follows the story of Isaiah, an ambitious young black 23-year old who works at an accounting firm.

Isaiah is asked to work overtime by his mild-mannered boss, Pierce, 45. Isaiah likes his boss and thinks his boss likes him but while working alone after hours, he discovers a video. This video exposes his boss as a member of a “The Black Cult”, a racist cult responsible for killing black people.

Following his discovery, Isaiah meets with his work colleague and friend, John, 24, and they go back to John's house. Unknown to Isaiah, he has been secretly drugged earlier on, resulting in an outer body and hallucinatory experience. Unsettled by his earlier discovery about his boss and while hallucinating, Isaiah stumbles across the Black Card but its meaning is unclear. Isaiah knows that somehow he is connected to this symbol of black people of the past and the racism they endured but its meaning remains shrouded in mystery. It is his job to solve the mystery of the Black Card and work out its intention for him, before it’s too late.

At the same time as trying to reveal the Black Card’s true meaning, he struggles internally with how he is perceived by others as a result of his after hours discovery.

Why we believe this film is important and unique

Set in London, this story uses a unique angle to explore racism and its impact on people of colour. We believe that this is a very important topic to talk about given the racial prejudices many have to contend with in today’s climate. We felt it important to examine work place racism in particular.

As it’s a thriller, we believe The Black Card will have you gripped as you wonder what’s coming next and how everything is connected!

Where you come in

As with all film projects, there are costs involved. The money we require is relatively modest at £900 and we are hoping that with the help of generous donors, we will be able to hit this target.

To help you see where any generous donations will be going, we have broken our budget into six key categories.

As you will see from the pie chart below, the biggest chunk of our budget will be spent on props and set design. We want to ensure we create a film that is visually powerful, highly atmospheric and ultimately something that we can be very proud of. 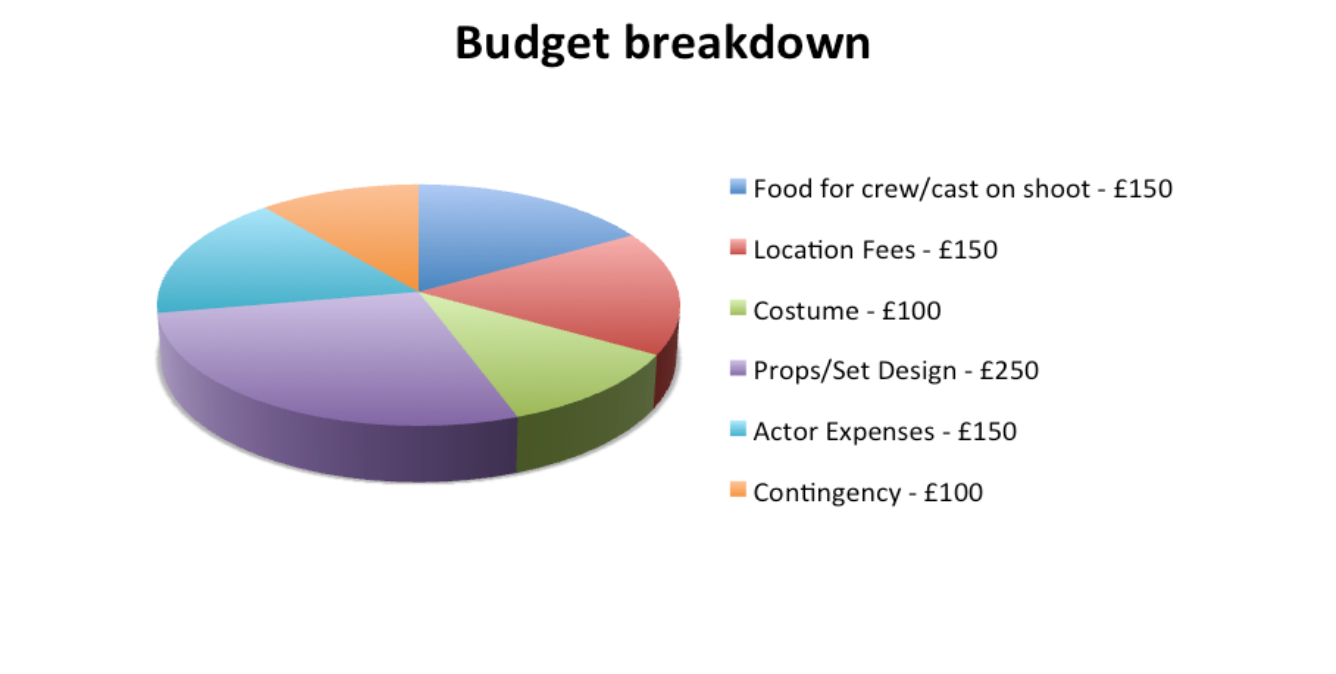 To ensure The Black Card is the best it can be, we have assembled a talented and very hard working crew:

There are always risks and challenges when making a short film but we believe with the right crew, cast and pre-planning these can be overcome with relative ease.

We have a fantastic crew in place, all capable of finding solutions to the most complex challenges and by planning in some contingency budget, we know we have a financial buffer to help us overcome any unforeseen hurdles.

We will be adding updates to our crowdfunding page  but you can also find our more about our progress with The Black Card and our crowdfunding campaign by following us on Twitter. Our Twitter handle is @fabianio124 .

Even if you can’t donate personally to our campaign, you can still play a key role in our success by spreading the word about our campaign to your own contacts. The more people who know about our campaign, the more likely we are to hit our target. Obviously any money you are able to provide would be fantastic too!

THE BLACK CARD
Your message has been sent.