A project by: Ben Robertson-Kay

Follow Become a helper
An exciting and ambitious short film shot in the west of Ireland.

After a work emergency, Niamh, a high-flying businesswoman, has to cut short a visit to her recently widowed father and return to Dublin urgently. Due to her own negligence, her car breaks down on a tidal crossing and she has to call on her father for help. In their attempts to save the car, it becomes apparent that the car isn't the only thing in need of repair.

But where will they stand once the tide comes in?

We are a group of young filmmakers graduating from Middlesex University London. Despite dedicating a significant amount of time to our film work at the University, we have been a part of many other projects as freelancers; short films, music videos, corporate videos, and post-production editing work in various small production companies. Now we intend to utilise all the experience and insight we have gathered to create a truly engaging film of the highest standard.

I'm a Czech-born filmmaker based in London, focusing on cinematography and directing. Over the past few years I've worked on many projects both in the UK and Czech Republic. Although my main focus has been music videos (a few of which have screened on TV, and gathered more than 300K views online) I've also been part of many short film projects; most notably as a cinematographer for a short film "Isabella" [Reddy, UK, 2018] which successfully screened at the BFI and many film festivals over the UK. I've taken advantage of all the skills I've amassed from my previous work to direct my biggest filmmaking challenge yet: Omey.

I was born in London, but my family comes from Dublin, and since visiting Cleggan from a very young age, I have always been taken aback by how different the pace of life is over there compared to London. My filmmaking experience lies mostly in producing and editing. Now I'm very excited about sharing a story very close to my heart: Omey. 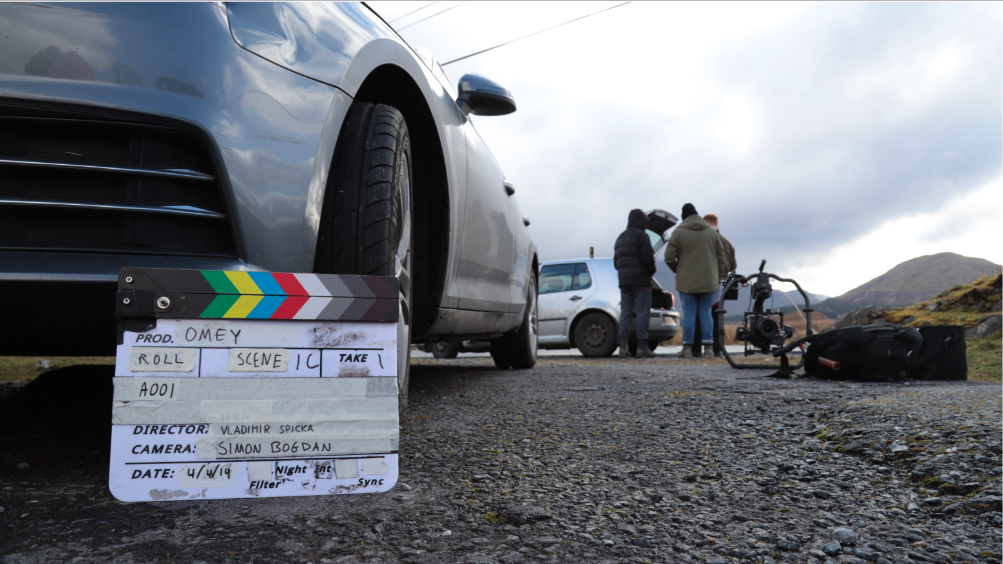 Lesley, a graduate from Drama Studio, London, was a pleasure to work with on set. Despite all the early call times and late wraps, Lesley maintained the utmost professionalism and optimism whilst somehow consistently performing at her peak. It takes a quality actress to portray a character who's perhaps behaving unfavourably yet still evokes empathy in an audience, and that's exactly what she manages to do. Oh, yeah... and she does all of her own stunts (whizzing through the Galway mountains).

Dan has a background in theatre, television, and film. From the very first time meeting Dan in the audition, he seemed to just get it. He got what the story was about, what was required of him, and who Sean, his character, was. In Omey, Dan balances the comedic and the dramatic moments perfectly; the end result is a well-rounded, naturalistic portrayal of Sean.

Despite putting out local casting calls, contacting local actors, and searching for actors as far as Galway city, time was hurtling us toward the production and we were still left with no actor to play the shop assistant. So, whilst on a recce to scout and secure locations, producer Ben Robertson-Kay and First Assistant Director Ryan O'Halloran happened to bump into Sean Geoghegan, an energetic local, in the pub. After chatting for a while, we told him our predicament. "Do you happen to know any local young actors for the shop assistant?" Ben asked him. "I surely do", Sean replied... "Sure my son'll do it. Oscar's a handsome young fella. Give him twenty euros and a pat on the bum and he'll be grand!"

Then, on the week of the shoot, our original taxi driver had to drop out. We quickly sourced another taxi and urgently contacted Sean to see if he would be interested playing our taxi driver and that's how this father and son duo ended up in Omey. ("The next Brendan and Domhall Gleeson", Sean suggested!) 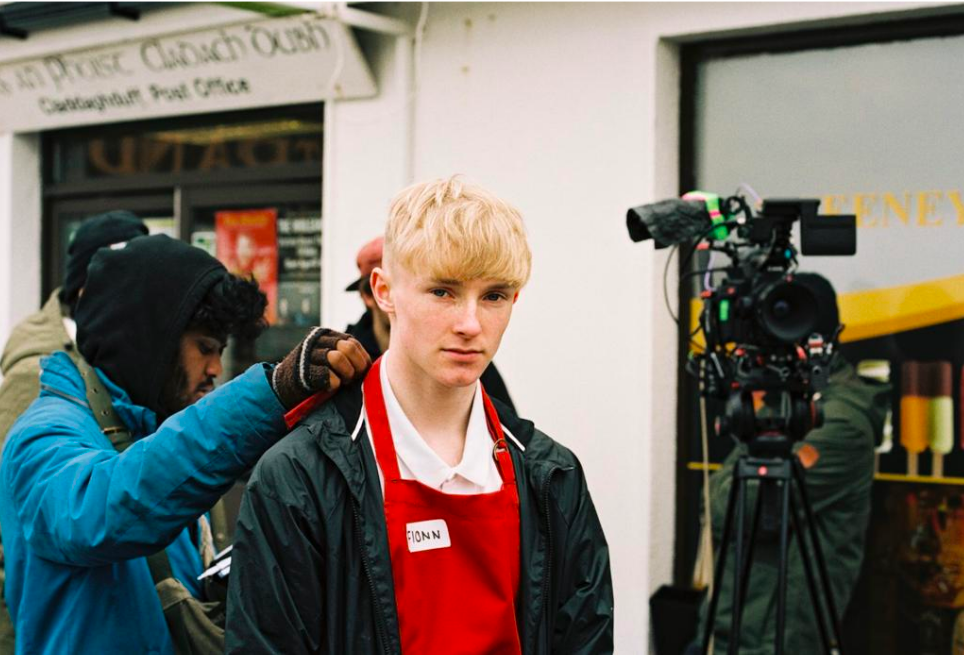 (Left to right) Rohan Reddy and Oscar Geoghegan on the set of Omey. Photo: Filippo Locatelli

Omey's narrative strikes a chord with many aspects of contemporary life in Ireland. Perhaps the most obvious issue it points out is the depopulation of rural areas, with most of the youth moving to the larger cities, leaving the countryside in an increasingly desolate state. While this is a trend worldwide, the Irish countryside seems to be particularly hit by this development, not only affecting the economic strength of the areas, but also having a negative impact on local communities and families.

Additionally, the film explores a subject close to the heart of all of us – family and the complicated relationships embedded in its structure, particularly the one between a parent and an offspring.

Our characters are neither villains, nor heroes, the same way many conflicts aren't black and white. A father lies to his daughter in order to spend a little more time with her, and a daughter feels guilty because she prioritises work over her father. In that sense, we can sympathise with both, as we understand their reasons and perhaps recognise some of their faults in ourselves too. Additionally, I hope to hint at the idea that a family relationship is a negotiation and a work in progress, not an obligation. 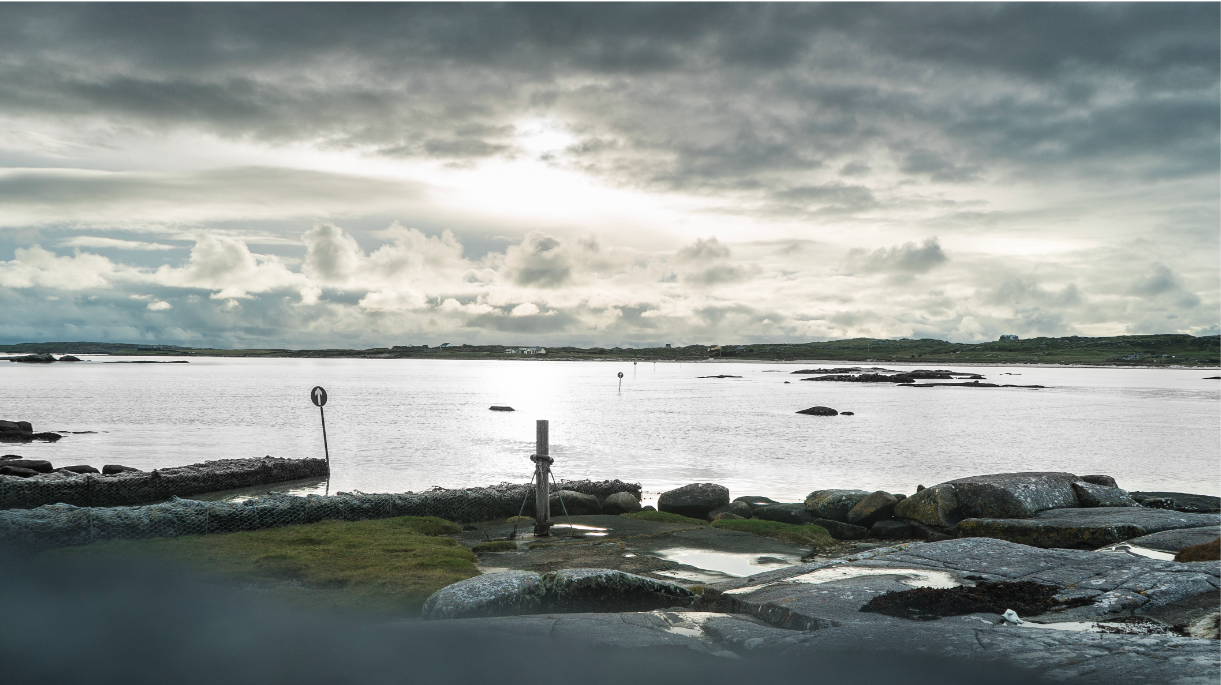 Our aim is to enter the film into the festival circuit, focusing on a number of prominent film festivals in both Ireland and the UK (Cork, Encounters, Aesthetica, BFI). At the same time, we intend to submit to many smaller festivals both locally and internationally, to spread the word about the film as far and wide as possible. Our goal will also be to make the short available to wider audiences on a suitable online platform [such as Vimeo] to either rent or buy. 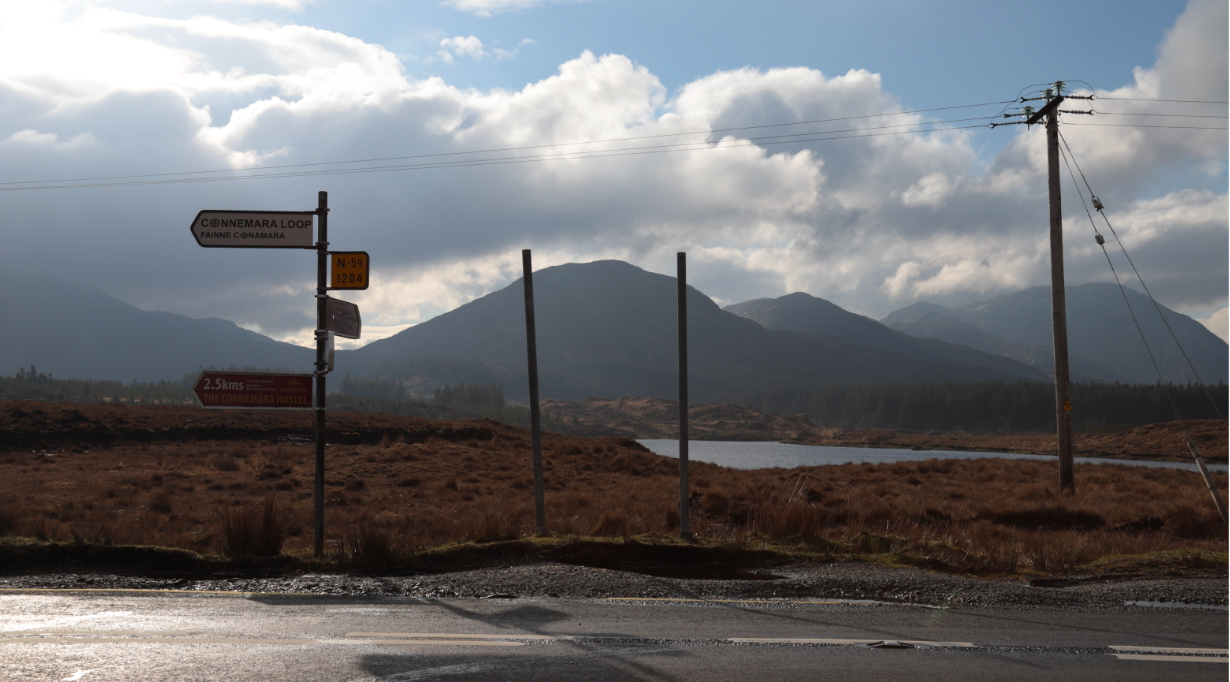 A very competent Producer, Ryan was sure to keep us on schedule around the tide no matter what the Connemara weather was throwing at us!

Simon is an extremely skilled and knowledgeable cinematographer and former student of Middlesex University. One of his most notable award-winning previous projects was Punchline. You can check it out here: Punchline (2018). 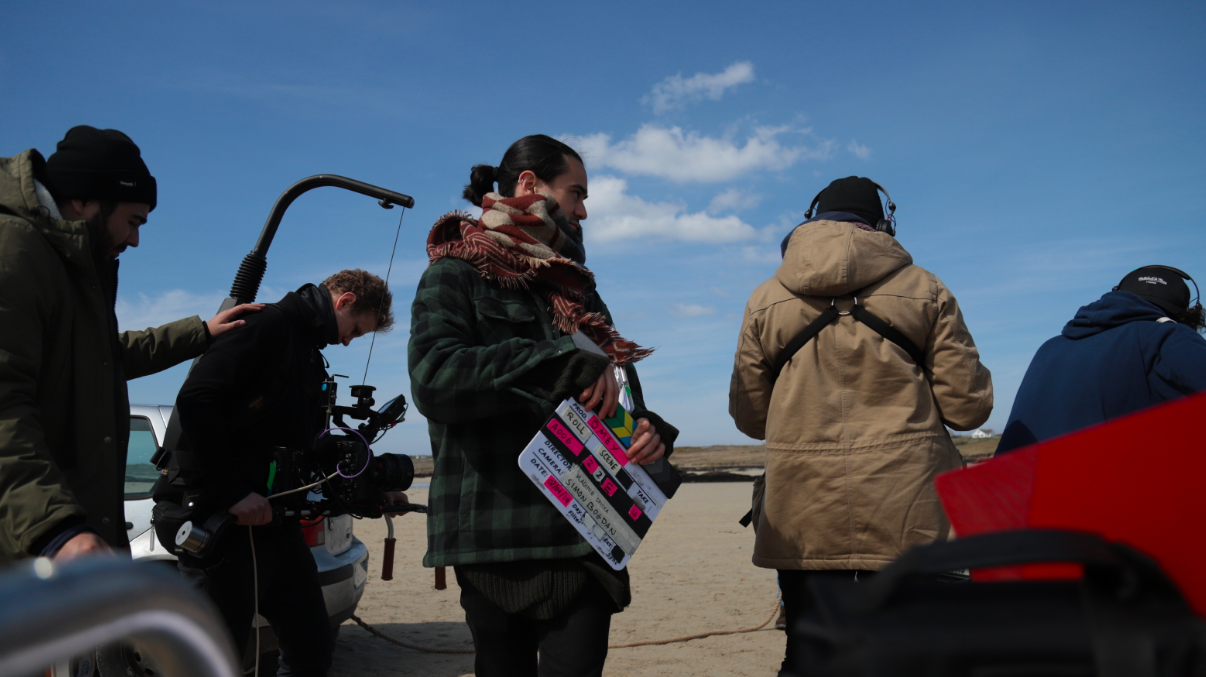 People will put up with a bad picture, but they won't put up with bad sound - that's what they say! Luckily we didn't have to worry about either of those problems as this skilled duo were prepared and did all within their power to capture clean dialogue, no matter how fierce the winds of the west coast of Ireland were. 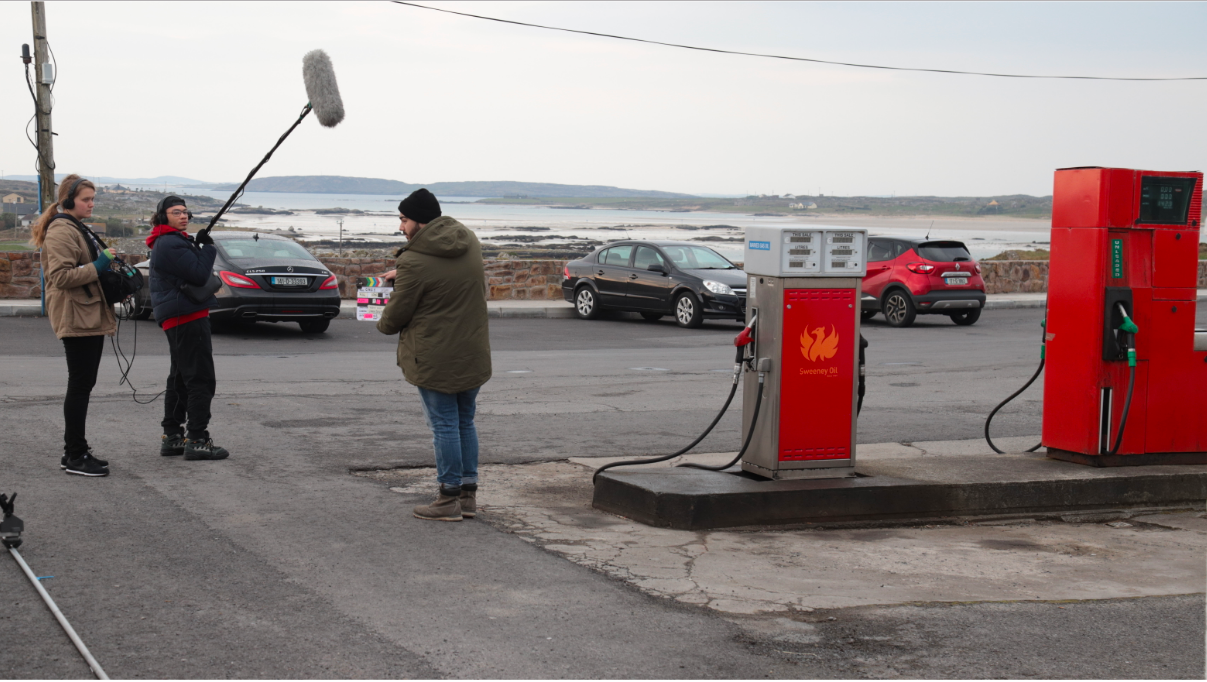 Filippo is also a former student at Middlesex University with years of film experience under his belt. He was a real asset to the camera department; his steady hand keeping everything in focus throughout the whole shoot... everything except the crew's wrap photo! 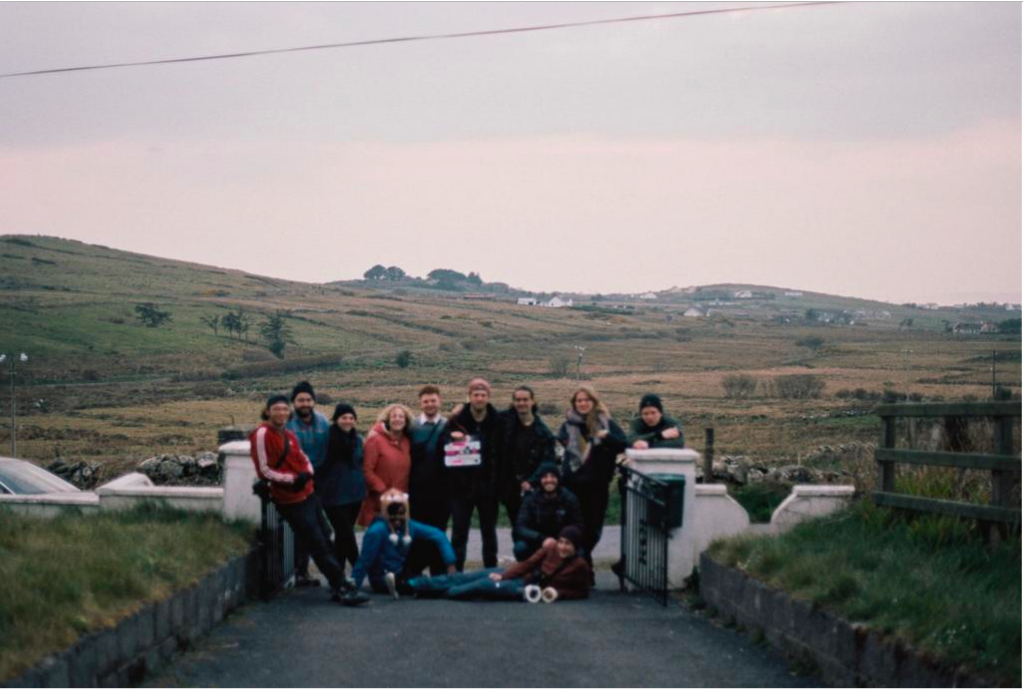 (We'll let him off as he wasn't actually behind the camera at the time) Photo: Filippo Locatelli

From a background of shooting and editing corporate videos, this was Tupaj's first time on a film set. Aware of the discipline required to make things happen fast and to a high quality, Tupaj quickly integrated into the crew and in the end was essential in quick turnarounds between takes and generally supporting the camera department. 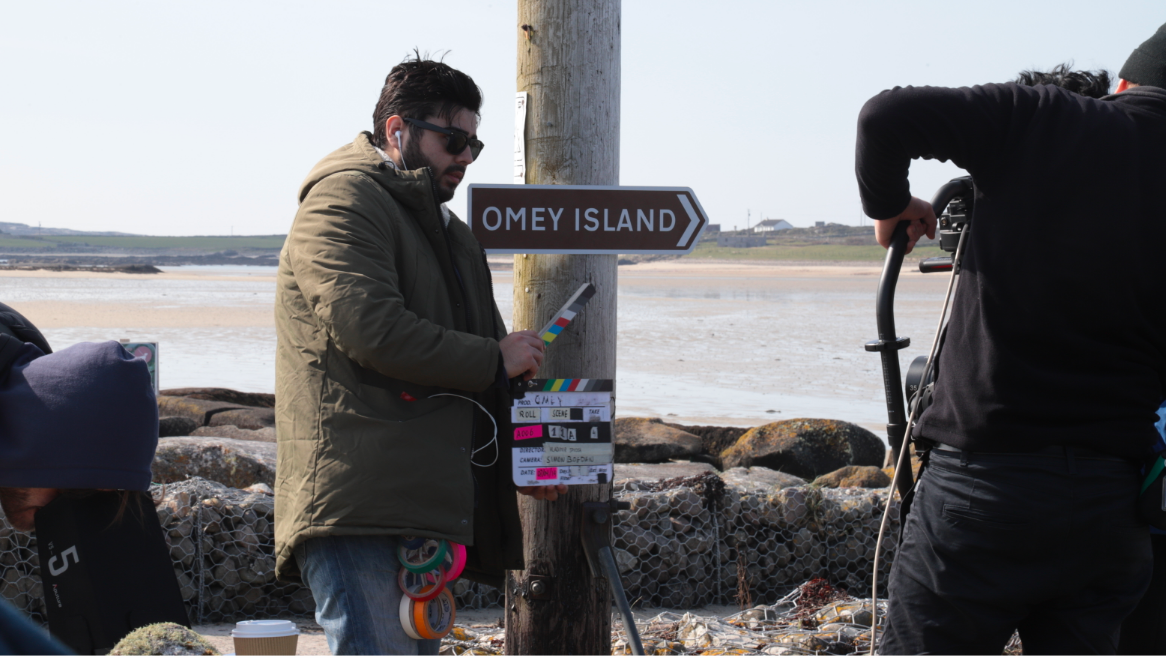 Due to the space limitations in accommodation and travel, Aynsley filled several integral roles on Omey. Aynsley couldn't catch a break... however, fuelled by Monster energy drink, he didn't need one.

Having directed a few short films, Rohan has a keen eye for detail and was passionate about keeping our continuity in check throughout the shoot.

Whilst our film didn't have any "special" makeup requirements, we were determined to have it done professionally. Aine was recommended to us and her portfolio and positive attitude blew us away. Check out her previous work here!

As we have already shot the film, our primary goal at the moment is to ensure the highest level of post-production possible. This is great news for you, the investors! We have already taken care of the riskiest part of the process, principal photography, and have brought home high-quality footage alongside amazing performances from our actors, which combine together into an engaging and entertaining story. The film is already edited and has been very well received at test screenings. Consequently we believe the film deserves a professional colour grade, sound mix, and music composition to maximise it's potential before sending it off to festivals worldwide.

That’s where you step in! We’ve been able to front the expenses up until now, but our financial capabilities can only stretch so far. For the final push to complete the film, we need your help! Therefore, we are hoping you will choose to tag along on the final part of our journey and help support our cause.

Money raised from this crowdfund will help pay for film festival entries, post-production costs, as well as recovering some of the production costs, including repaying a small loan from a very close friend.

Please see below for a rough visual representation on how the budget has been allocated. 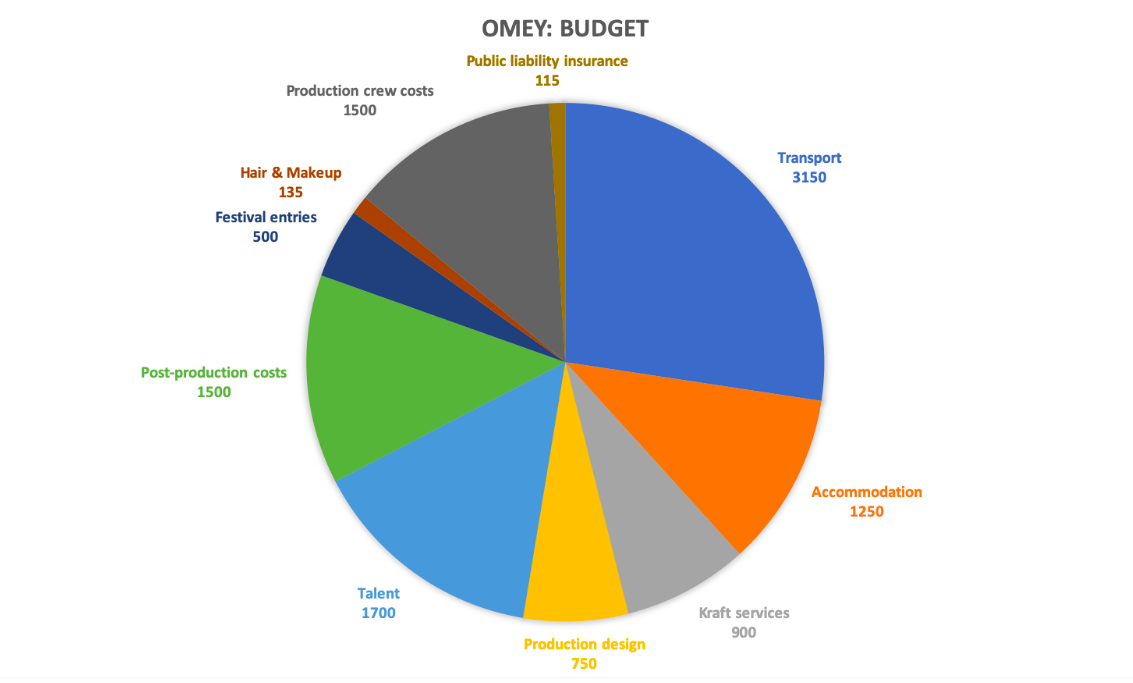 All donors will be listed in the film credits to show our appreciation for your support, no matter what the size of donation. Check out our rewards section to see what other perks your donation could nab you!

Keep up-to-date with the project by following us:

The system used for donations is Paypal and you can donate with debit, credit or through your PayPal account, if you have one. We can also accept donations via bank transfer (as well as cash), so if this is your preference, just email us and we'll give you the details you need!

Love the project? Can't donate? You can still help!

We'd also be extremely grateful if you could share this page on your social media to help spread the word!

Omey (Short Film)
Your message has been sent.

Thank you, your report has been sent.
Omey (Short Film)