So Others May Live

A project by: Beatriz Barreiros

Working in an Air Force Squadron cannot possibly be easy. This is the story of the men from 751 SQN who live under the motto “So Others May Live”. These selfless and bold human beings are part of this Search and Rescue team, which saves hundreds of people every year.

Having the second biggest Search and Rescue Area in the world, 751 SQN is responsible for everyone that might need help – on the sea or on land.

So Others May Live is an inspiring promotional film about great humans that repeatedly put themselves in danger to save others.

My inspiration to do this short film was my father, a proud member of this crew. When he joined this Squadron in 2004, he went through many tests and courses, always working hard to succeed.  When I was younger, I thought this was only my father, but when I started to grow, I learnt that everyone that works with him is like this: Always giving their best to save lives and always trying to be better than the previous time. I think this shaped my personality a lot when I was a kid because I grew up to be an adult that loves to help people and take risks.

Beatriz Barreiros never thought about pursuing a career in the Film Industry until she came across the BA Film Course at Middlesex University. She always loved film but never imagined that she could earn her living through it. Her passion for producing was born in her first year of University and she has stuck with it ever since. So Others May Live will be her debut as a Director and the most personal film she has ever made.

Reece Beale has had an interest in acting since he was 8 years old, which transferred into filmmaking when he got to secondary school. By the time he started University, he decided he wanted to pursue a career as a cinematographer. He is now finishing his studies and working as a freelancer in his craft, and has worked on amazing projects such as 'Mondo Money' and 'Potty the Plant', as well as filming interviews for Uber and various projects with EE (where he gained experience in shooting Run and Gun videos).

Alex Holovin has loved film ever since his father bought a VHS camera - he was around 7 years old. This passion was also fuelled by watching films. But film is not his only passion: Music is also a great part of his life, which is how his interest in sound design was born. He knows the power sound can have in film and wants to make a living out of the art. He has worked as Sound Designer for 'Run While You Can' and 'Dove'.

Mariana Valente has been editing for the past decade but only decided that she wanted to make a living out of it around 5 years ago. She applied for Middlesex University in 2015 and is now finishing her studies. She has vast experience in editing as well as colour grading and recently worked on 'Bad Coffee', 'Something Catchy' and 'Run While You Can'. 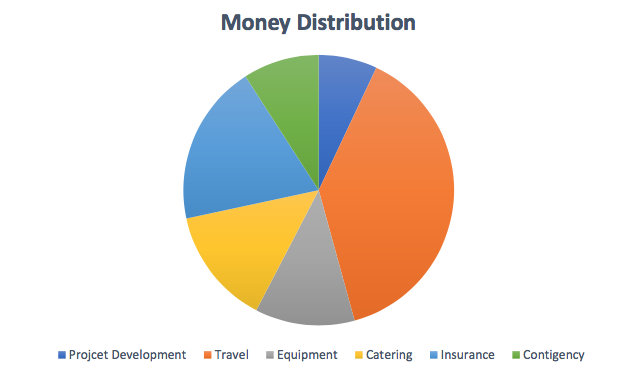 The budget for the film is £1,500 and it will be distributed as shown in the graphic, more precisely:

What’s in it for you?

This will be the first film in documentary form about the Portuguese Air Force's 751 Squadron. By creating this film, we will be able to show people exclusive content about these men who work every day to save lives.

A reward campaign will also exist, where we will give people 751 SQN merchandise and film-related awards e.g. thank you credit, Associate Producer.

Make sure you check our reward section on the right hand side of the page!

Help us spread the word!

If you can't donate but still want to help, please share our project with your contacts. This can help us more than you think!

So Others May Live
Your message has been sent.

Thank you, your report has been sent.
So Others May Live